The Co Media Lab’s Citizen Media project, supported by the Australia India Council (AIC) has a number of enthusiastic Bangaloreans participating in it. The project will is helping building capacities of citizen journalists, equipping them with the requisite skills needed for a more nuanced coverage of socio-economic issues within their local communities.

The members of the citizen journalism project are:

Shilpa Rao is an Industrial Engineer working on SAP Supply chain in Infosys, an active volunteer in Citizens for Bengaluru. A hard core Bangalorean, an extrovert, who loves the city and would love to contribute in ways possible to make a difference to people’s life,of those staying in this city. Self motivated, firmly believes in action, taking ownership and making sure the goals are met.

Sathya Sankaran is the bicycle mayor of Bengaluru. Passionate about issues of urban governance, he has also founded UrbanMorph, an organisation that looks at urban problems of sustainability and works on building new ways of solving them. 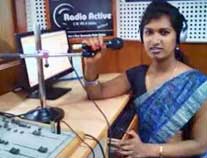 Priyanka Divaakar has the distinction of being the first trans radio jockey of the country (on air since May 2010) and through her work and activism, represents the sexual minorities community with extraordinary sensitivity and openness. She works for Radio Active community radio station in Bengaluru and hosts the show called ‘Yari Varu’ which focuses on issues faced by the LGBTQIA+ community. She is also actively involved in the day-to-day management of the radio station.

Arjun Malhotra is a research associate working for a non-profit research organisation based in Bengaluru, India.

Deepa Vaishnavi is a human resources and general management professional with an experience of more than a decade with the IT Industry. She has been actively involved in soft skill trainings since 2007. She has also taken up editing related projects from 2013-14.

Mohammed Abdul Aleem is a software engineer based in Bengaluru. He is also a volunteer co-ordinator with Citizens for Bengaluru, a civil society group that works on the issues of urban governance and other civic issues.

Arjun Rajan  currently works with Oorvani Foundation and writes for Citizen Matters. He has previously also worked for the Concern for Working Children, an organisation that works in the area of children’s participation in local governance. He has also been an educator having been a part of the Teach for India programme, and Parikrama Humanity Foundation. He holds a Master’s in Sociology from the Manipal Academy of Higher Education.

Rahna Jacob is a fresh graduate and an intern at Citizen Matters. A science enthusiast, she spends her free time buried in a book, practicing her penmanship or carving bits of chalk into scrolls.

Co Media Lab is happy to share that we are part of an international project on community media! The project, supported by the Australia India Council (AIC), is spearheaded by Prof Usha Rodrigues, Deakin University and India partners

Bengaluru Dialogues: Sambhashane is a first of its kind event, and focuses on citizens and citizen media, and the urban ecosystem that includes diverse voices from civic and environmental spaces, social justice movements and arts